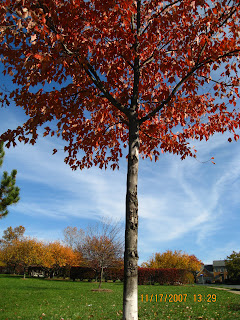 PS: Blogger is cropping my photos, so some of them are not even the full picture...but, whatever you see...Enjoy!!!
Happy Thanksgiving to all....

Change. The only thing constant in life is change. As cliché as it may sound, it holds true. Anything and everything around us is changing. May it be our age, the time of the day, our priorities, our thoughts or for that matter weather…

It is quite fascinating to see how in spring all the trees get new leaves; they have flowers and look beautiful. In fall again they change colors and look gorgeous and eventually they just fall off the trees. They have their own cycle and so do we.

Talking about change… In 2005, we changed our digicam and got Canon S1 IS. Initially, I did not like it, as I was pretty used to my old camera…but then after I saw the results, I started liking it. It is with that camera I did all my novice photography sessions, and sometimes blogged about it as well…Lately that camera was acting weird so we got another one…..and there it was…Déjà vu…I now was resistant to change to the new one! But this time I thought of giving it a try and we did a contest between the two!!!

With fall colors all over, it was great photo op…here are a few photos taken from both the cameras…I think the results are pretty much the same, so I think I am going to switch over to the new one and let go off the past (My old camz)…after all that is what moving on is all about!

This pic is clicked by Sachin!!! Amazing pic...

This is Sachin's creativity!!! Should give him credit I guess... The view from my bath 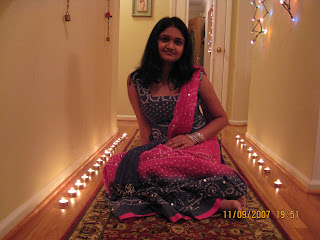 PS: Text in red talks about the movies Om Shanti Om and Saawariya. Please read at your own risk, might contain spoilers.

Thanks to the timing as Diwali this year fell over the long weekend. It was absolute fun! I just worked for half a day on Friday. Although the busy season in my profession takes a toll, I really enjoy this holiday season period. It kind of compensates it all...

Friday was decorating the home, Doing Pooja, Good food, meeting with one of my cousin, fireworks, Meeting with our friends and playing cards...

Saturday we saw Om Shanti Om, and went to another rocking diwali party at our friends. Had good food, cards, music and games.

Om Shanti Om was sadly a disappointment for me as I was expecting much more from this movie. I know expectations always let you down, but could not help but expect great work from SRK and Farah Khan...SRK did his bit. He was awesome. Now, after two days, when the movie has sunk in, I think I can give it a 7, although I was expecting it to be a 9 caliber. The movie was basically a spoof on bollywood and a twisted remake of Karz. I liked Deepika in the movie but somehow the editing was not up to the mark. I also could not digest the fact that they found an exactly similar looking girl after 30 years of death of a superstar...I mean I could have digested either of the two facts, but both reincarnation and an exactly similar looking girl was a bit too much for me...The movie just did not gel together very well. But what the hell, Shahrukh khan makes it worth it.

Oh yeah, I had trail once in the game as well... but too sad, no one played in that round...But I started with 30 chips and ended up with 100! Needless to say, I was the winner

Sunday we watched Saawariya, had Thai food, Watched Before Sunrise and Before Sunset!

Saawariya was a surprise for me. I just loved Ranbir Kapoor in the movie. Loved the set. Loved the colors( although it was mostly two colors all over) Loved the character of Ranbir Raj. Sonam is also good, although she did not do much in the movie than just cry and laugh. Also I think it could have been done without Rani Mukherjee...I never thought I would do this, but I will give it a 7. Yeah, same as Om Shanti Om...

As we were leaving for Saawariya, we could not help but capture the Fall Foliage right outside our place. Here is a glimpse:

I started Before Sunrise at around 8 and then played Before Sunset back to back...I did not realize when I slept, but then again I got up at around 3, finished the movie and slept again at 4! It was worth it! Great movies and a great concept! The way the actors change overtime, their way of talking, their style, their attitude, everything...moreover the looks. The movie was actually shot after 9 years the first one was made! Cool!

Thankfully Today is a holiday for me! Festivities are over, and now I am getting ready to get back to the routine...yeah yeah laundry and stuff...Oh well...but overall it was good and fun weekend! Now looking forward to Thankgiving!!!!!!!!!! 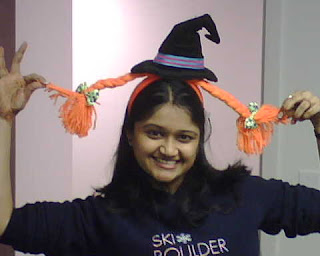 They say, every good has a bad, and every bad has a good associated with it. Is it really true? Let’s see…

, it is getting cold.

, you get to wear your boots and jackets

, I am unable to find my warm shoes I wear at home.

, I found an old pair, which I can use for the time being.

, because of day light saving time , it was almost dark when I get out of the office.

, we got another hour in the morning to sleep

, we cannot figure out how to stop the indoor thermometer to beep when it is below freezing point.

, we can still push some buttons and make it stop.

, we watched four movies over the weekend.

, one of them was No Smoking

, after a long time, I reached office on time today.

, my boss was not there to see that…

, I did not do anything worthwhile in office today,

….Sabiha gave me a call when she heard that…

, I am not able to blog often these days

, I am writing one today!

Okay, I think it works, and we can definitely find out, something good in bad, we should not do vice versa though…

This weekend of mine, was not so great but was fine! We had some friends over on Friday, we watched “ Jab We Met” and “ No Smoking” back to back!

While Jab We Met was a sweet romantic movie, No Smoking was bizarre.

I really liked Kareena’s acting in Jab We Met. Her character was different yet you can identify a typical hostler Sikhani from Bhatinda in her. I also loved Shahid’s intense role. Songs were good too. Overall, not a non predictable, but a sweet movie! I can give it an 8/10!

Coming to No Smoking, I don’t think it made any sense to me. I am not sure what was the movie trying to accomplish. Did it even have a message? Or the maker was just trying to be different? It was really confusing. After a point of time, I stopped keeping track of what is happening. I don’t know if this is because I dozed off a couple of times in between, or that the movie itself was so confusing. I am not taking the risk of replaying it and trying to get a hold of it. I would just say, Watch it at your own risk. For Paresh Rawal’s acting and John Abraham’s looks, I will give it a 4/10.

The third movie was Spiderman 3! We had not seen it when it was out in theatres. We ordered the DVD as soon as it got released last week. All I would say that if I were to rate all three movies, I would rate Spiderman I the first, III as second and II as third. Although, I wanted to see a bit more than Mary Jane in Spiderman movie…

The weekend also incorporated, some grocery shopping, camera shopping, and a trip to a friend’s friend’s new place…It was more like a mansion than a house though…

Well, another weekend passed by like this….weekends go by so fast, and as I always say, time is flying…Too bad, it goes by fast

, it is passing by in the company of someone whom I love the most!!!

So, I will sign off now, have fun guys…have a great week ahead!!!

About the pic: Taken from my blackberry pearl; At office; Last week; On Halloween day!!! We had a costume party at work. I could not go and buy a dress but then I just picked this witche's hairband from CVS!!! Too bad I could not get a dress....Good that I had something....Something is better than nothing...Right!!!

This too good too bad is fun actually!!!!